This week’s Throwback Thursday covers a course on hoverfly identification I attended in August 2013 as part of a qualification in Biological Recording and Species Identification.

A weekend of hoverflies

This weekend I was at the Field Studies Centre at Preston Montford in Shropshire to learn about hoverflies. This is the penultimate course in my University Certificate in Biological Recording and Species Identification run by Manchester Metropolitan University. The course is run by Roger Morris and Stuart Ball of the Hoverfly Recording Scheme and I had previously attended their 2 day course which I enjoyed very much so I came back for more!

The course started with an introduction to hoverflies and how to recognise them, Roger and Stuart always emphasise the importance of understanding the ecology of larvae, which are often understudied in invertebrate groups. Hoverflies have particularly diverse larval biologies, with examples from all modes of life except parasitism and unusually for flies are relatively well studied, with the larvae of around two thirds of the UK’s 282 species known; there is even an identification guide on them, now sadly out-of-print – the Colour Guide to Hoverfly Larvae: Diptera, Syrphidae by Graham Rotheray.

The next day began by going through some of the the keys and learning the characteristics of the different tribes, good revision for me and I am finally able to find my way around wing venation.

A hoverfly wing – R-M is your friend

Based on © Hans Hillewaert / CC-BY-SA-3.0 via Wikimedia Commons

You see the first time I came across wing venation in a key I found it very confusing, the wings just seemed to have a mass of different veins branching all over the place and trying to work out which were which was tricky. In hoverflies at least, a useful tip is to find the radial-medial (or R-M) cross vein, which is quite prominent in the middle of the wing and crosses the vena spuria or false vein (actually a deep fold), particular to hoverflies. This immediately locates the radial 4 + 5 vein which runs along the top, the discal cell which lies underneath and the first basal cell which it forms the outer border of. Now venation is not so daunting!

On the Sunday we were allowed out of the lab to see what hoverflies could be found around Preston Montford field centre which were then brought back for killing, pinning and identification. A few other diptera groups sneaked in as well!

My modest catch, well I had a MSc thesis to write! 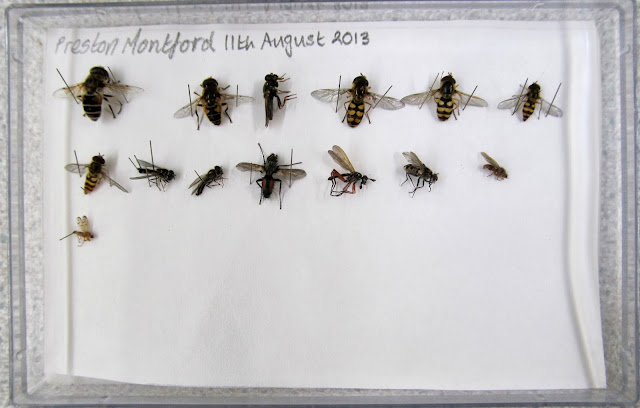 The final day comprised a test towards the uCert qualification which I passed. Hopefully I will also pass the 2nd assignment and then I am just one more identification course away from the Certificate!

Thanks to Roger and Stuart for another expertly run course!

I went on to complete the  University Certificate in Biological Recording and Species Identification which I thoroughly recommend, there is also a related MSc course. The hoverfly module was probably the most useful of those I attended and helped me be selected for a job surveying and identifying hoverflies and other pollinators at the University of Reading last year. I also continue to be involved with the Dipterists Forum but have been a bit lapse in sending in my hoverfly records lately!