A few days ago, the American Cancer Society reported an incidence of 4.3 million cancer cases in China in 2015 alone along with 2.8 million deaths due to cancer[1].

A few years ago, during my early teens, when I was just learning the ways of the world, I was told I had lost family members to cancer. Throat cancer and pancreatic cancer to be precise.

A few decades ago, the scientific and clinical world was just discovering what cancer was and its capabilities.

And today, 4th February 2016 is World Cancer Day. As you read this, good samaritans across the world are today engaging in raising awareness of this disease called cancer. Social media is abuzz with empowering hashtags and reports on cancer statistics and prevention breakthroughs are being disseminated. Research laboratories and the medical industry are feverishly working to continue understanding the evolving reach of cancer. President Obama, in last month’s State of the Union Address, has urgently called upon America to find a cure to cancer[2].

As a recent graduate in the life sciences and public health, I have been learning about cancer and its debilitation for the past five years. I remember studying the cancer mechanisms within our bodies in Immunology lectures, and then learning about the debilitating burden of cancer in the world during my Chronic Epidemiology lectures.

But it was only last month that the crippling nature of the disease and potential for pain and loss really hit home.

Earlier last month, the world lost two famous men – David Bowie and Alan Rickman. Print and social media exploded with tributes over the loss of these music and film legends respectively. What struck me though was that they had both succumbed to cancer.

Alan Rickman, or Severus Snape as he came to be known, while blurring the lines of magic in the wizarding world and reality for several fans across the world, had grown to become an embodiment of undying love, powerful magic and great sacrifices that would remain eternal. Even after Snape was killed by magic in the series, he was forever. His magic was forever. Alan Rickman was forever.

As a true writer, J.K. Rowling has created a character in the Harry Potter series so intense so as to evoke emotions within readers and lose themselves within the denials of reality and worldly burdens. To hear about Alan Rickman’s loss was a jerk back to this reality. Alan Rickman had suffered from cancer? Snape died of cancer? Magic and reality began to blur again and denial set in before it finally hit home – cancer is here, has been around and spreading, and it is very much real. Ironically, no magic is going to work here.

A few days earlier, David Bowie succumbed to an eighteen-month battle to liver cancer. The revolutionary who changed the face of music dissemination on the internet platform forever now remains etched in the hearts of fans worldwide.

Power, fame, reach, impact – It is no match for the crippling nature of cancer. We need a cure. Realistically, we need to make our prevention and containment efforts more effective. Healthcare stakeholders are rushing against a continually evolving and spreading disease whose knowledge we possess in the scientific and humanitarian realm is currently only the tip of the iceberg. Somewhere around the world, a loved one is succumbing to cancer as we speak.

I make it all sound so dystopian, but the statistics are real.

Cancer took 8.2 million lives in 2013. The number of new cases of cancer each year is expected to jump 8.4 million from 2010 to 2030, totalling the expected number of people to get cancer in the year 2030 to be 21.6 million. This is equivalent to the entire population of Australia getting cancer every year, as the American Cancer Society highlights[3].

With lower resources and lesser access to treatment and access to cancer medication in the real world, the pain is even more real. Of all patients dying from cancer in untreated pain, 99.9% of these are in the developing world. While 84% of pain-killing morphine is available to the eight countries of the developed world, the rest of the world has access to the remaining 16% of it3.

On the occasion of World Cancer Day today, lets take a pause to recognise what was said to us in the Paris Charter adopted at the World Summit Against Cancer for the New Millenium in 2000[4] –

‘Cancer knows no boundaries, and individual countries cannot address the challenges of cancer in isolation.  A new cooperative approach to research, advocacy, prevention and treatment must be established.’

It is time, ladies and gentlemen, to cross frontiers and come together against cancer to protect our loved ones, and ensure access to treatment so as to preserve the dignity of their lives. 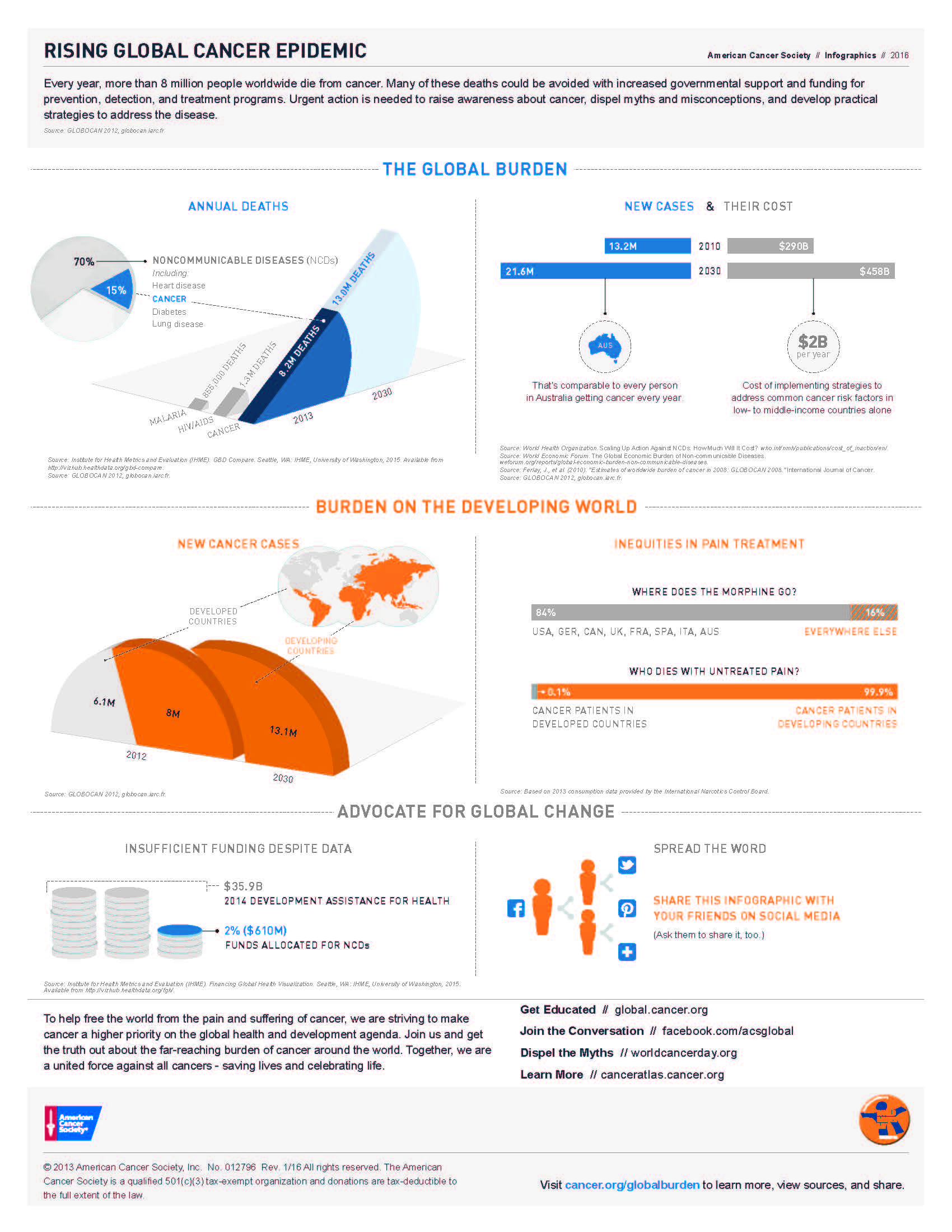